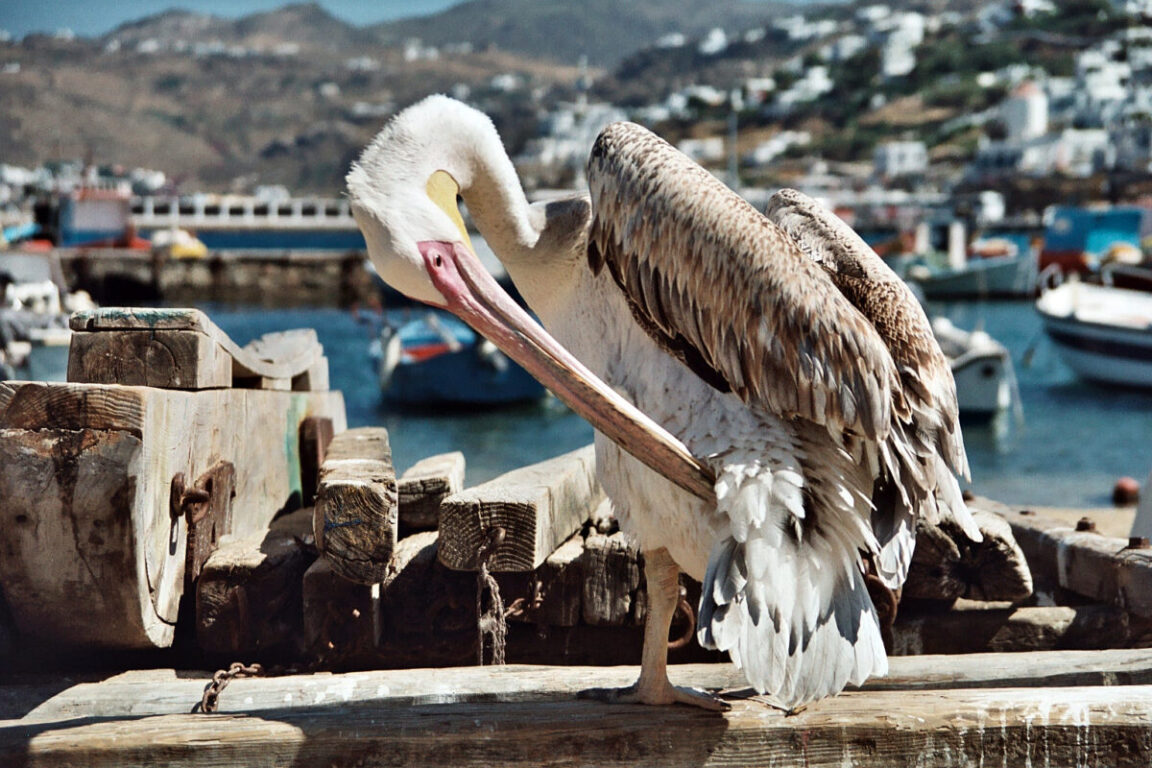 Petros the Pelican: The King of Mykonos

Some years before the absolute glamour, the ultimate extravagance and the best luxury parties, Mykonos was a much quieter, yet absolutely beautiful island. It was then, when an unexpected visitor made his first appearance. One who was set to become the most legendary of them all. The Queen of the Cyclades, as Mykonos is often called, is now famous all over the world for the lustrous party scene, as well as for the celebrated people who are visiting every year. But there’s no way of coming to Mykonos, or even learning about it, without hearing all about Petros (Peter), the world’s most famous Pelican! Images of the wonderful, white bird have travelled across the globe, making him a staple of Mykonos’s tradition. But how did his story begin?

Petros fell like a gift from the sky to the locals in 1958. He was injured and probably lost, so he couldn’t finish his migration travel. A fisherman found him and gave him to Mr. Thodoris Kyrantonis, another fisherman who loved animals wholeheartedly. The man took him under his wing and nursed him back to life. He was named Petros, in honor of a captain who lost his life in the World War II. Soon, he had already captured the Mykonians’ hearts and had practically become one of them. They had never seen such a big bird before, so they considered him to be a good luck charm for the island! Petros was roaming free on the streets and beaches, always ready to greet locals and new visitors alike to lift their spirits. His huge appetite for fresh fish and live seafood was satisfied by everyone, since he would get food wherever and whenever he wanted to, as if he was the master of Mykonos!

One time, the fabled Pelican almost caused a Political Incident! Somehow he ended up in Tinos. The two neighboring islands had a sort of feud between them and so the Mykonians believed the bird had been abducted out of jealousy! Since the people of Tinos didn’t really want to give him back, the Mykonians took a stand and even the country’s government was involved in the case. They fought hard and they finally took custody of the lovely bird once again… He was welcomed back with a big feast full of food, such as freshfish and live seafood, music and dancing! Mykonos style…

…And the rest is history

Petros became once again the most beloved animal on the island. He was photographed by tons of visitors, and also adored by the likes of celebrities such as Jackie Kennedy Onassis and Brigitte Bardot, amongst many other Greek and foreign stars! After all, he was a star all by himself… With Mykonos gaining more and more status in later years, it’s natural that his fame also increased. So much that sometime during the 70s, he was asked to participate in a filming, so he travelled all the way to New York City. Apparently, he liked the Big Apple so much that he left the studio to fly around and explore, giving yet another scare to the people who loved him. He was later found napping in the city! Talk about star quality!

Unfortunately, he tragically died in 1985, when a driver ran his car over him by mistake, while he was sleeping under it. Despite the efforts of vets in Thessaloniki, where Petros was taken to be healed, he didn’t make it. Then, Jackie Kennedy Onassis along with the Zoo of Humburg, donated two pelicans to ease the local’s pain. One of them was named Petros ll. Today there are three pelicans in Mykonos – the third one is also a rescue, just like Petros.

Petros, was offered all the love, the affection, the best food and the best luxury parties Mykonos has to offer… After his death, he became even more of a legend. The locals still remember him, the media still talk about him and even children’s books have been written based on his story. It’s safe to say that he is, and always will be, the undisputed King of Mykonos!